Inspiration Monday calls. After a busy year I’m ending on a high note. I have submitted to both of my usual challenges this week, which I shall endeavour to do more regularly in 2014 – no promises though!

Here is my Christmas submission. The inspiration is from the prompt ‘Say no more‘. Longer than usual for me, but when inspired, write.

Our pair of steampunk heroes get inspired, too, as the bell tolls for a new year. What are they planning? Say no more!

With just a few seconds to go, Joshua Smythe and Samuel Fortesque clinked their glasses of vintage port and fell silent to wait for the tolling of the bell on the village church.

“So, what do we focus our attentions on this year, Joshua? Steam engines are doing pretty well, and the flying machines certainly are fascinating.”

“The Royal Society is buzzing with new innovations, too. But, I think electricity has a lot of potential.” Joshua took a thoughtful sip of port.

“Have you heard of that latest fad in America? There’s a whole new movement that say they can communicate with the dead.”

“I have indeed. All started with some sisters, and ghostly rappings I believe.”

“I think that with electricity we could provide the proof they are seeking. If we could refine some electrical instruments to detect finer and more sensitive vibrations I’m sure that those communications could be listened to, and recorded.”

”We need to find out what these Spiritualists get up to – and I know just the man to get us started!”

Sam looked over his spectacles at Joshua, “Who?” 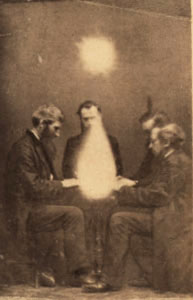 ”If you mean the recently knighted Sir Arthur Conan Doyle, he’s in the drawing room with the others.”

They left the sanctuary of the library and headed to the drawing room to join the rest of the revellers. Smythe pushed open the doors and peered through the billowing, acrid smoke from a dozen of the finest Havanas. He found Doyle in an armchair next to the blazing fire. After a few whispered words, Smythe, Fortesque, Doyle, and a man he said was a ‘medium’, returned to the library. Fortesque locked the door behind them.

All the lamps were extinguished, save for one on the mantle shelf, the large, ornate mirror cast the flickering glow around the room. Doyle introduced the medium as Cyril, who explained what would happen and how those sitting in the seance circle were expected to behave. He told them about what he knew about spirit contact and life on the ‘other side’. Sam turned down the wick.

Each man placed his hands palms down on the table, each little finger touching that of his neighbour so that the circle was complete. Cyril fell silent.k on the solitary lamp until the walls of the library disappeared into darkness.

Each sitter watched the others, sceptical as to the validity of such science. The clock in the corner, heard but no longer seen, ticked and tocked. They waited.

“Maxwell.” whispered the medium, “I have the name, Maxwell.”

“No. It is James Maxwell who brings a message.”

“Who is James Maxwell?”

“The link is weak, but he says …” Cyril paused, listening to a voice not heard by the others. “… he says, ‘electromagnetic induction – experiments, he never had chance – he will be heard.’ he says ‘Fortesque will know’.”

The medium pulled his hands back from the table and opened his eyes. “He wishes you good luck.”

Joshua poured a glass of water for Cyril, Sam turned up the lamp.

“Well.” said Doyle, “You have your answer.” He smiled and shook their hands. “Cyril will need a while to recover, and I shall return to the drawing room. I think another port is in order.”

“If what we have heard is true, electromagnetism is our clue.” Sam gripped Joshua by the shoulders and shook him. “Our contact beyond the veil can only have been James Clerk Maxwell. Einstein says he was the most profound scientist since Newton. If he can guide our hands, we can only succeed.”

“Thank you, Cyril. We will be needing your services again soon.”

“We must get back to the house tonight, and be in the laboratory in the morning – a new year dawns!”

The One Word Challenge not only caters for writers of fiction, but also poets.

For the November challenge I submitted the flash fiction piece in the previous post. I was also inspired to write this poem. Those who know my poetry will be familiar with my usual tongue-in-cheek insistence that ‘if it don’t rhyme, it ain’t poetry’. This piece don’t rhyme, t’ain’t funny, neither.

To my surprise it made runner-up in the challenge, so I’ve impressed m’self. Leave a comment, let me know what you think.

From here I can see down, in to the valley.
I watch the morning mist roll away with the wind;
the evening mist rise to fill the space between the trees.
Spring snow fades with summer sun, frost returns with autumn fall.

I live alone, separate from the distractions of existence.
Separate, but not isolated.
I have seen life in the cities and towns,
life full of desires and illusions, and of false realities.

From here I can see; from here I can be.
At one with life, there is no duality,
of  good and evil, rich and poor, have and have not, yours and mine.

Here there is only forest, I am part of that forest.
The trees sigh, animals scamper, birds chatter.
But my mind is still, enlightenment strikes like lightning – and is gone as quickly.
It cannot be forced, it will return when it is ready.

Soon, the forest and I will be one.

I’ve been a bit busy lately; work, newsletters, family, you know, all that sort of thing. But I contributed the Writers Online Talkback One Word Challenge for November, and here is my piece – adjusted to take account of the constructive judging. The word is ‘separation’.

“They say there are only six degrees of separation between you and any other person on the planet.”
He checked the cords round her wrists.
“I suppose that means, only six generations ago we were in the same family. Related. You are my blood sister.”
He paced around the kitchen table, tapping the blade against his chin.
“Makes you think.”
The ankle ties were tight, too.
“Doesn’t seem right though, does it?”

The towel round her mouth stifled her reply.

“Married to my blood sister … “ He banged the knife against the table.
“I think there needs to be more separation – we can’t share blood – it’s just not right.”

He didn’t hear the door open.

“Brother.” The voice was deep and gentle, but held a threat. “Put the knife down.”
He turned and smiled. “Well, hello … brother.”
“Let’s discuss this like family.”
“But we haven’t been family for a long time, bro. Why now? I’m busy.”
“Because, it’s gone far enough. Come outside.”
He turned back to the table. “I don’t think so.”
“Drop it, now.” There was no gentleness anymore. “Drop it, or I’ll separate you from your breath.”